This post/document has been created from a few years now of working online and helping people and organisations communicate online including times when unexpected things happen and they need to respond to events that blew up. I’d appreciate feedback on this and please do link and pass it along as I think it will benefit a lot of organisations. This is one of the modules in the Online PR Course.

During the week we read of the Boards.ie hack and how they reacted to it and did it quickly. I was asked to give some input (it was quite minor) on how to communicate to their members and the general public. I was hugely impressed that they had given themselves a very short deadline to go public about it and to inform as many as they could and backed their announcement up with an FAQ. It was a near perfect example of crisis communications.

Online PR and communications needs to be handled differently in some regards. The audience online is different but being online also means search rankings and findability are crucial. Do a Google search for “Irish Pork” and 13 months later all you read is bad news: 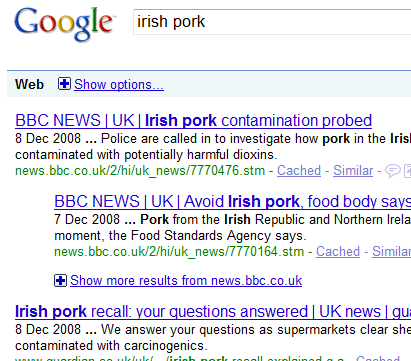 How to react to a crisis using online communications tools

Firstly and it might be obvious but all organisations should be at minimum be listening to what people are saying about them online. Tools like Google Alerts, Twitter search, Boardtracker etc. should be in daily use. Ideally though an organisation should be in various communities so they know about any crisis before an alert pops up to let them know a volume of outraged messages. This could be official presences there or their staff using these spaces for personal use. See! It pays to have staff using these places.

When a crisis happens and is public or is going to be made public then you need to call in experts. This helps you reduce the workload when dealing with this, calms you down a bit, gives you perspectives you haven’t spotted perhaps cos you’re bricking it but it also adds credibility. Boards.ie for example called on Brian Honan for advice, being a well-known computer security expert.

All hands on with staff

Don’t let the staff know by some formal email or have them learn of this via an external source. Bring them together, fully inform them about what’s happening and get their take. Tell them your response plans and see if they can help. Ensure though that they will not go gung ho and reply without prior approval. It will sometimes be best to have your staff be the ones to reply if they are respected members of some online communities.

A public response should be as rapid and transparent as possible. Create a page on your website for the crisis. If an online storm is happening or is expected to happen then you need to create a central and trusted source of information. Don’t let the main source of news on this crisis be some place totally out of your control. This first response could be as simple as “We’re responding” but it’s a reponse. If you have more detailed information put it on this page. Relay on the page that this will be the central place for all updates, more updates are on the way and ask people to reference this page as the source of information. Let people know that you will answer all questions and this page will be the place where they get answered first but you will get around to answering questions in other places too.

Inform the world of your reponse and continuing responses

Inform the press, bloggers, Twitterers, Facebook Fans of your response page and ask them to reference this to everyone. Ask them to link to it. Ask your staff to link to the response page using their Facebook, Twitter accounts but direct people to an agreed company rep to get answers from or else have they relay information requests in to the crisis team. Brief some news organisations in advance of a widely sent press release so they can be ready to interview you as soon as this breaks. Use language that makes you look competent, assuring and in control.

After getting the public announce out the gap start looking around. See what people are saying. Respond to incorrect or totally false information at the source and on your reponse page. Sometimes the person making the false claims might not let you respond which is why your page can react to it.

See what questions are being asked, don’t wait for them to come to you. Answer as many of the questions as you can on your response page first. Then go out to where they are being asked, answer them there but always link back to your page which you will point out answers that question and many others. An unanswered question is a dangerous thing. Make sure the void is filled by you and not someone speculating.

Has the horse bolted?

If news broke and now the controversy is being called something you don’t like such as “Disgusting Dominos People” or Eurostarfail then use that term and even put it in your page title. Don’t ignore it. If that’s how the conversation is going and it becomes the most used phrase for the crisis then get in there and fight for your right to reply. People will Google that phrase and you want to be found to it so you can give your side. Dominos did that with their CEO responding to those awful videos by replying in his own video, with the same wording as the original videos and he did it in the same space where it happened – YouTube. Stupidly now, Dominos pulled their video and instead the original videos can be found again. Leave it up! 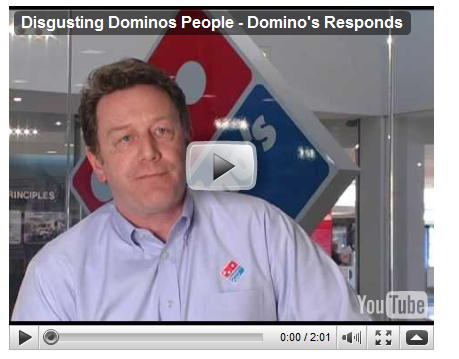 Remember that the web will remember forever. As Dominos should have remembered. For a while you need to keep going even if tiring and be on top of it all. Like Arnold Vinick in the West Wing when a nuclear powerplant has a meltdown and he holds a press conference and keeps answering questions until the press gets tired and go home. The story ends at that news cycle. 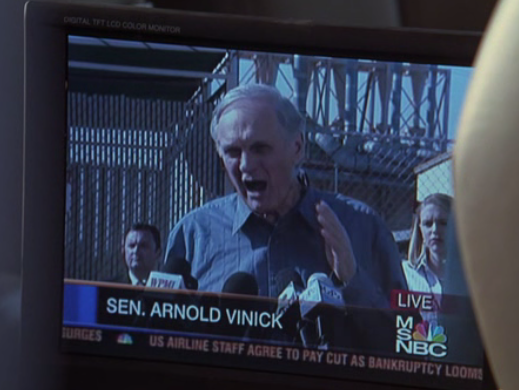 Going back and looking at the results for Irish Pork:

You can see that the first few results. Even without clicking through people will have a negative sentiment from the headlines and the snippets. So use traditional PR to send out good news after the event. Use the same phrases so that the more recent news that appears on the websites of these news organisations will push down the older news. See what other online spaces are still

There’s always going to be one. No matter how harmless the crisis is, some people will use it to attack your organisation or sometimes you get used as a proxy for a grudge over someone else. If people put something up on a website and they do not give you a right of reply then reply on your own space and reply in other spaces too. That way if people find a negative post they’ll see references in other spaces around it where your take is expressed.