Every now and then someone will write a post encouraging you to bandwagon on to the latest trend in digital. This is such a post. Snapchat is now mainstream and pretty huge in Ireland. IPSOS MRBI says 21% of adults aged 15+ are on Snapchat in Ireland. 9 months ago it was 11%. 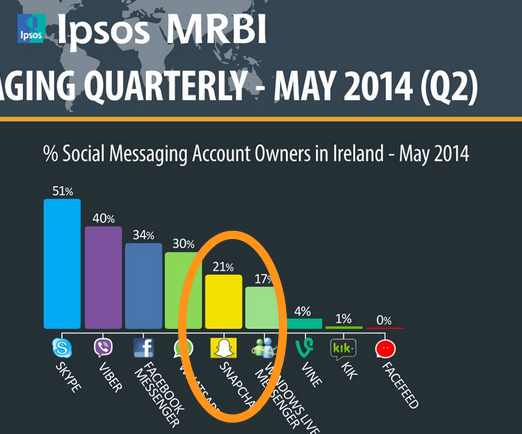 Get over yourself. People were sending silly pictures of themselves well before Snapchat but Snapchat is seen as one of the enablers of this. Snapchat is a great little app that allows you to send pictures or videos taken right now to your friends and they are guaranteed to expire/evaporate in ten seconds or less when clicked on. You can write a teeny amount of text on the image or video and draw on it too. The images are not on their phone, they’re not on the Snapchat servers. Lost forever like tears in the rain. Ephemermal media they’re calling it. 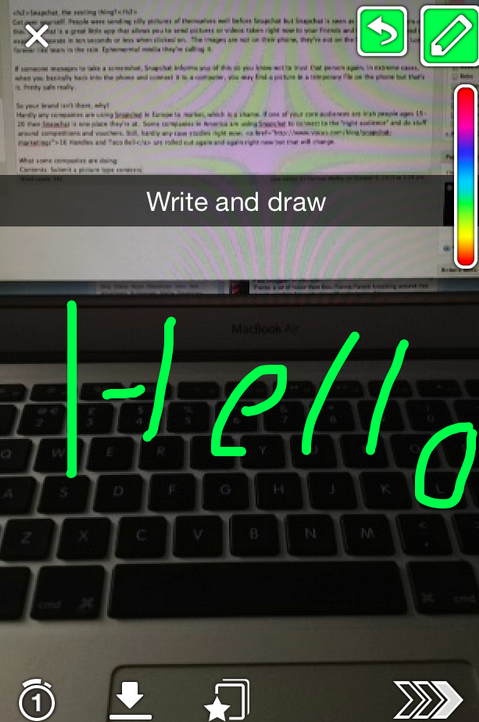 If someone manages to take a screenshot, Snapchat informs you of this so you know not to trust that person again. In extreme cases, when you basically hack into the phone and connect it to a computer, you may find a picture in a temporary file on the phone but that’s it. Pretty safe really.

So your brand isn’t there, why?

Hardly any companies are using Snapchat in Europe to market, which is a shame. If one of your core audiences are Irish people ages 15-20 then Snapchat is one place they’re at. Some companies in America are using Snapchat to connect to the “right audience” and do stuff around competitions and vouchers. Still, hardly any case studies right now. 16 Handles and Taco Bell are rolled out again and again right now but that will change.

What some companies are doing to Market on Snapchat:

Snapchat Stories are made for brands

Now that Snapchat has serious investment and it has a huge audience, it needs to commercialise what they’re doing. Everything these days is about the timeline so Snapchat is now going to try and do something with that. First comes creating something that end users will appreciate and then they can make money off it later. Enter Snapchat Stories.

Snapchat Stories allow you to weave Snapchats you made into a piece of content that is viewable for 24 hours. You can add to this Story any time you want and it gets tacked on to the end of the story. When people log in, they can see in the timeline, any Stories from friends. This is mine: 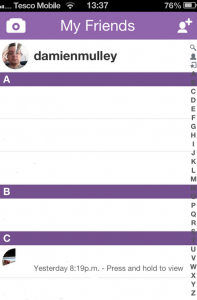 This is a Vine of a Snapchat Story I made:

And stats released this week (June 23rd 2014) show that Snapchat Stories are getting … dun dun dun, 1 billion views PER DAY. Highly successful. There still aren’t any tools for brands to use but give them time, they’ll have them.

In the week that Facebook (who?) released Slingshot (what?), Snapchat announced a new feature for a single brand (for now). People will be able to add their content to the Snapchat Story of a brand at a specific location. It’s called Our Story. Done around a music festival for now. Body and Soul was last week and various Snapchatters were keeping me in the loop via photos and videos. Perfect alignment. Expect to see big brands host these around music festivals, launches, fashion weeks etc.

Some tips:
If you bung a load of photos or videos together on to your Story, they can become quite boring, even if just a minute long. Make the shots snappy and have an actual story in place. This means pre-planning for it. Use text in your Story to accentuate or explain the content. Fail fast and fail cheap: Try things, mess about. It’s Snapchat, silly mistakes do disappear.

I await a band making a music video and sharing it as a Snapchat Story. 10 second bursts, it can be done.

Right now Snapchat is mobile only and everything needs to be done through the mobile app for iPhone or for Android. There are no official apps for businesses that can be used. You can’t “officially” upload premade material to Snapchat so you can’t have highly produced content. (There are obviously unofficial ways around this, same for Vine) I’m sure if you are a huge brand though, there probably is a tool you can use for Snapchat that does allow uploading of pre-made video. Vine definitely has this.

Like everything else before it, Snapchat Stories will work really well for the first while but as more people and more brands start to saturate your timeline, they’ll become less effective. Same has happened with Banner Ads, Google Ads, Facebook Ads and it will happen with Twitter promoted tweets too. Get in early, make the most of it and then analyse what is coming next and be ready for it.

Do have fun on Snapchat.